Finally... a new version of The Red Prison

Hey guys, firstly, can I apologise for the really long delay between new versions with the game. I was distracted by other projects and only just made it back to working on this game.

There's actually a heap of behind-the-scenes changes, which I'll outline briefly, along with some important in-game additions, which I might actually start with because it's far more interesting.

Additions to the game are merchants and guildmasters. In friendly settlements throughout the Red Prison world, you can find merchants who are stocked with various goods, ammunition and sometimes magic items for you to buy. Prices are affected by your charisma. Players start with some gold now as well, which is also affected by your charisma. There's even a unique merchant placed somewhere within the game (ok... he's in Cindemere), who has an inventory of powerful magic items to buy (or steal - more about that below). 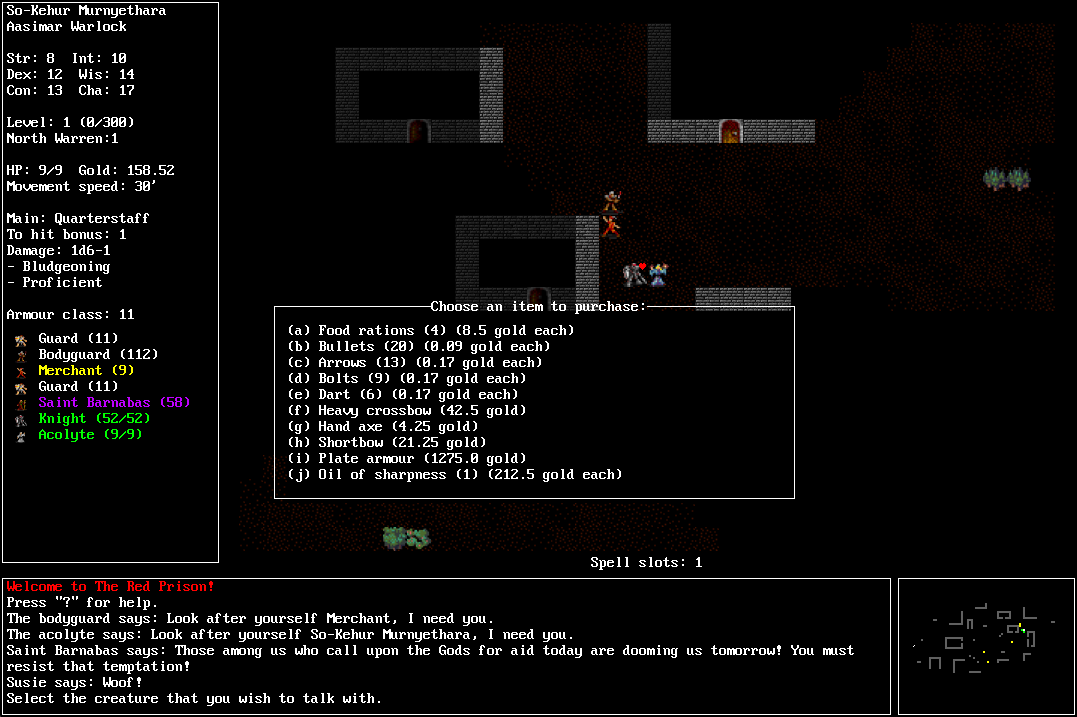 You can also sell items to merchants as well, for a far lower price than you'd pay to buy the same item, but the option is there. It's also affected by charisa.

It's still in a state of flux, but currently, there's no reason why you can't kill and loot a merchant for their whole stock. And of course, merchants aren't particularly tough opponents. So I added bodyguards to make sure that it was a risky enterprise. If you feel confident of defeating the bodyguard, then the merchant is all yours. This might change in later versions if it's too easy to exploit, but that's how the game works currently.

There is only one guildmaster at the moment, with more to come in the future. The plan is to create a roster of unique NPCs to potentially hire and to place them throughout the game. But for now, there is Ingefred the guildmaster in North Warren. She has a collection of hirelings who you can pay to join your party to flesh out your team and cover up and weaknesses. Again, these prices are affected by charisma.

And now behind the scenes: a fair while ago I changed the game's code over from an old version of Python (2.7, I think), to the latest version of Python 3. This actually required a fair bit of rewriting, which was annoying, but it all seems fairly stable. That created other problems though and my workflow of compiling and publishing was ruined because I couldn't get the game to play nicely with my previous setup.

So I switched my compiling over to a project called Nuitka. It seems to be working really well (after a bunch more headaches with compatibility). The benefit to this is that Nuitka apparently brings about some pretty significant improvements in performance, so I actually think that players might notice the game running a lot better than previous versions!

All in all, things are moving forward well and I plan at sticking at it for a while yet and putting out regular updates. Any feedback is more than welcome!